We use the latest methodologies for testing Staphylococcus  resistance:

Additional information about microbial pathogens and resistance to antibiotics. 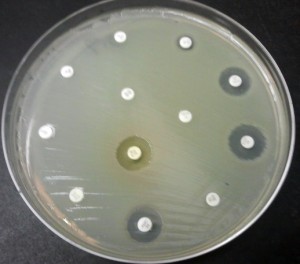 Staphylococcus aureus (colloquially known as “Staph aureus” or a “Staph infection”) is one of the major resistant pathogens. Found on the mucous membranes and the human skin of around a third of the population, it is extremely adaptable to antibiotic pressure. It was one of the earlier bacteria in which penicillin resistance was found—in 1947, just four years after the drug started being mass-produced. Methicillin was then the antibiotic of choice, but has since been replaced by oxacillin due to significant kidney toxicity. Methicillin-resistant Staphylococcus aureus (MRSA) was first detected in Britain in 1961, and is now “quite common” in hospitals. MRSA was responsible for 37% of fatal cases of sepsis in the UK in 1999, up from 4% in 1991. Half of all S. aureus infections in the US are resistant to penicillin, methicillin, tetracycline and erythromycin.

This left vancomycin as the only effective agent available at the time. However, strains with intermediate (4-8 μg/ml) levels of resistance, termed glycopeptide-intermediate Staphylococcus aureus (GISA) or vancomycin-intermediate Staphylococcus aureus (VISA), began appearing in the late 1990s. The first identified case was in Japan in 1996, and strains have since been found in hospitals in England, France and the US. The first documented strain with complete (>16 μg/ml) resistance to vancomycin, termed vancomycin-resistant Staphylococcus aureus (VRSA) appeared in the United States in 2002.[76] However, in 2011 a variant of vancomycin has been tested that binds to the lactate variation and also binds well to the original target, thus reinstates potent antimicrobial activity.

A new class of antibiotics, oxazolidinones, became available in the 1990s, and the first commercially available oxazolidinone, linezolid, is comparable to vancomycin in effectiveness against MRSA. Linezolid-resistance in S. aureus was reported in 2003.

Community-acquired MRSA (CA-MRSA)has now emerged as an epidemic that is responsible for rapidly progressive, fatal diseases, including necrotizing pneumonia, severe sepsis and necrotizing fasciitis.MRSA is the most frequently identified antimicrobial drug-resistant pathogen in US hospitals. The epidemiology of infections caused by MRSA is rapidly changing. In the past 10 years, infections caused by this organism have emerged in the community. The two MRSA clones in the United States most closely associated with community outbreaks, USA400 (MW2 strain, ST1 lineage) and USA300, often contain Panton-Valentine leukocidin (PVL) genes and, more frequently, have been associated with skin and soft tissue infections. Outbreaks of CA-MRSA infections have been reported in correctional facilities, among athletic teams, among military recruits, in newborn nurseries, and among men who have sex with men. CA-MRSA infections now appear endemic in many urban regions and cause most CA-S. aureus infections.

Streptococcus pyogenes (Group A Streptococcus: GAS) infections can usually be treated with many different antibiotics. Early treatment may reduce the risk of death from invasive group A streptococcal disease. However, even the best medical care does not prevent death in every case. For those with very severe illness, supportive care in an intensive care unit may be needed. For persons with necrotizing fasciitis, surgery often is needed to remove damaged tissue.[80] Strains of S. pyogenes resistant to macrolide antibiotics have emerged; however, all strains remain uniformly sensitive to penicillin.

Resistance of Streptococcus pneumoniae to penicillin and other beta-lactams is increasing worldwide. The major mechanism of resistance involves the introduction of mutations in genes encoding penicillin-binding proteins. Selective pressure is thought to play an important role, and use of beta-lactam antibiotics has been implicated as a risk factor for infection and colonization. S. pneumoniae is responsible for pneumonia, bacteremia, otitis media, meningitis, sinusitis, peritonitis and arthritis. 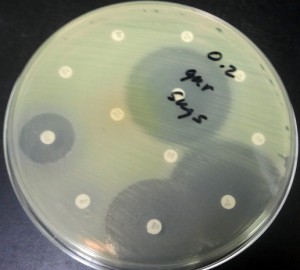 Pseudomonas aeruginosa is a highly prevalent opportunistic pathogen. One of the most worrisome characteristics of P. aeruginosa is its low antibiotic susceptibility, which is attributable to a concerted action of multidrug efflux pumps with chromosomally encoded antibiotic resistance genes (for example, mexAB-oprM, mexXY, etc.) and the low permeability of the bacterial cellular envelopes.Pseudomonas aeruginosa has the ability to produce HAQs and it has been found that HAQs have prooxidant effects, and overexpressing modestly increased susceptibility to antibiotics. The study experimented with the Pseudomonas aeruginosa biofilms and found that a disruption of relA and spoT genes produced an inactivation of the Stringent response (SR) in cells who were with nutrient limitation which provides cells be more susceptible to antibiotics.

Clostridium difficile is a nosocomial pathogen that causes diarrheal disease in hospitals world wide.Clindamycin-resistant C. difficile was reported as the causative agent of large outbreaks of diarrheal disease in hospitals in New York, Arizona, Florida and Massachusetts between 1989 and 1992.Geographically dispersed outbreaks of C. difficile strains resistant to fluoroquinolone antibiotics, such as ciprofloxacin and levofloxacin, were also reported in North America in 2005. 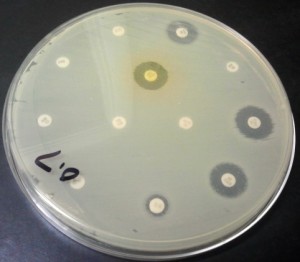 Escherichia coli and Salmonella come directly from contaminated food. When both bacteria are spread, serious health conditions arise. Many people are hospitalized each year after becoming infected, with some dying as a result. By 1993, E. coli resistant to multiple fluoroquinolone variants was documented.

On November 5, 2004, the Centers for Disease Control and Prevention (CDC) reported an increasing number of Acinetobacter baumannii bloodstream infections in patients at military medical facilities in which service members injured in the Iraq/Kuwait region during Operation Iraqi Freedom and in Afghanistan during Operation Enduring Freedom were treated. Most of these showed multidrug resistance (MRAB), with a few isolates resistant to all drugs tested.

Tuberculosis is increasing across the globe, especially in developing countries, over the past few years. TB resistant to antibiotics is called MDR TB (Multidrug Resistant TB). The rise of the HIV/AIDS epidemic has contributed to this.

TB was considered one of the most prevalent diseases, and did not have a cure until the discovery of Streptomycin by Selman Waksman in 1943. However, the bacteria soon developed resistance. Since then, drugs such as isoniazid and rifampin have been used. M. tuberculosis develops resistance to drugs by spontaneous mutations in its genomes. Resistance to one drug is common, and this is why treatment is usually done with more than one drug. Extensively Drug Resistant TB (XDR TB) is TB that is also resistant to the second line of drugs.

Resistance of Mycobacterium tuberculosis to isoniazid, rifampin, and other common treatments has become an increasingly relevant clinical challenge.